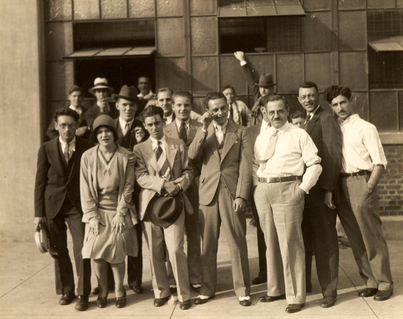 Christmas was a special time at Fleischer Studios... There were Christmas cards made by Fleischer Studios artists to exchange with each other... there was a huge party... and there was sometimes even a salary 'bonus.' We've put together some glimpses of how those zany Fleischer animators celebrated Christmas in the 1930's.

All items in this Christmas exhibit are part of the Fleischer Studios Family Collection. 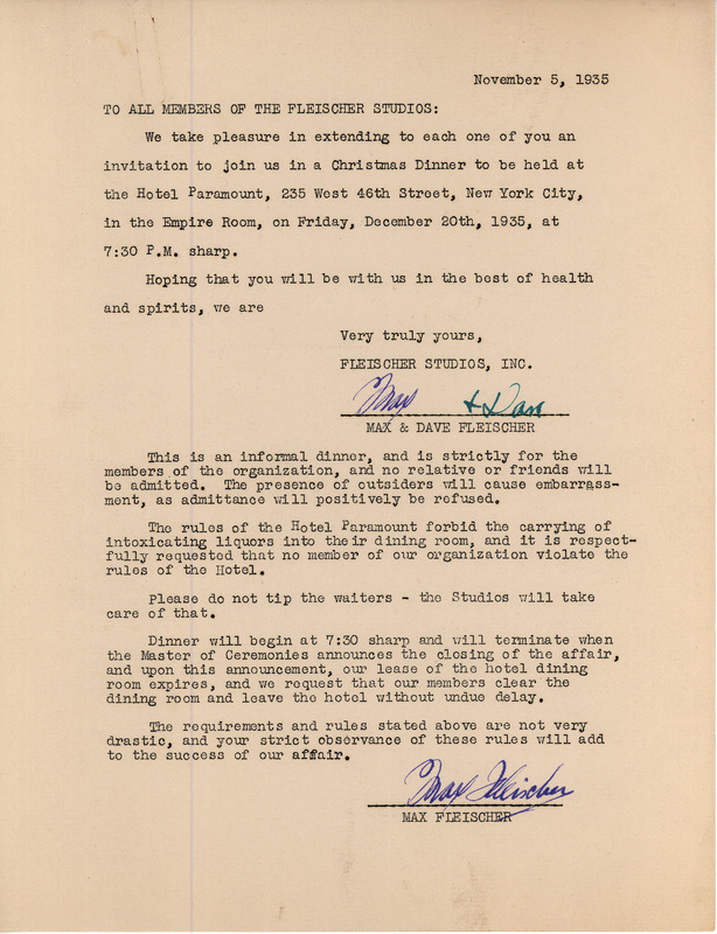 Animator Shamus Culhane describes one of these Christmas parties in his book “Talking Animals and Other People:”

“In 1931, despite the depression around us, Max had a very successful year. It was so good that he decided to give a Christmas bonus of five hundred dollars to each animator. In addition he threw a party at the Hotel Wellington that was long remembered by the hotel’s staff.

“The Evening started off with a banquet and an emotional speech by Max. After that, the bootleg whiskey took control, and at one point we had a very drunken football match. I think the ball was a knotted napkin. Max captained one team and Dave the other. We charged at each other, overturning chairs and tables, and ended up in a heap of over a hundred people, all shouting and laughing. When Max found his glasses, he decided it was time to go home, but before leaving he announced that drinks were on the house. The party lasted until five in the morning, and Max was presented with a huge bill from the hotel for breakage. What the hell, it was a great way for us all to start the New Year. Good old Hotel Wellington!”

(Note: This has been re-typed for ease of reading.)

“This Christmas Dinner was a huge success. They’re getting better every year. Max started the festivities with a grand speech with a surprise tag on the end in the form of another “Service Certificate”. The show was opened when our lovelier lassies displayed their gowns and figgers. The latest of the Parisian and Venician fashions whisked through the gaping audience. Some of the boys of the Inbetweening Dept. and Frank Paiker supplied the comedy relief with some far fetched fashions. Millie Figlozzi scored a decided hit, convincing us when we want someone to sing a red hot rhythm…we’ll have “No Other One”. And she sure went to town with “Yankee Doodle”. Herbert Holmdale (wonder where all those brushes disappeared to) delighted us with some clever slight of hand stuff. He had everyone fooled, but confidentially he did it with mirrors. Sydel Solomon and Terch Carrier, came through in grand style, carrying the torch to the bitter end. The G Men gave us a few minutes of swell entertainment and real laughs. Dave Tendlar, Izzy Sparber, Nick Tafuri, Bill Sturm, Graham Place and Eli Brucker deserve a big hand. Izzy in the role of Max Fleischer, was more like Max, than Max is himself. Mina Williams, the little girl with the BIG voice rendered two delightful songs, her voice reaching way up thar. Pauline Kaufman and Joe Oriolo, that pair of graceful dancers did a mean Rhumba, if you know what we mean and encored with Truckin’. Sam (Sonny Boy) Robinson supplied much hilarity with his baby act. A couple of songs and Sam, the little squirt, was chased off the stage with a soda squirt. Hey Becky! Anton Loeb sent his booming voice through the strains of the “Song of the Vagabonds” and “Play Fiddle, Play”. Whatta voice, whatta voice. Jack Mercer and Tom Moore were one of the show high spots. A radio amateur act, a bit of opera and some swell impersonations of Haile Selassie and Mussolini gave us plenty of rib ticklers. Selma Rosen, Neil Sessa and Jay Richards indulged in some enjoyable close harmony. Dave Tendlar again came to the fore with Al Windley as his stooge. T’was great stuff, that ventriloquism, we didn’t know Dave had it in him. Morris Fleischer was “In the Mood for Love” and in rushes Mary Hilliard, our nurse. FLASH! Repeating their success of last year, the Inbetweeners furnished a few minutes of burlesque what was burlesque. Weren’t you surprised to find Edith Vernick a member of the chorus of beyootiful gals? A great hand for Willard Bowsky who M.C’d. the whole show, and to Jack Ward and the entertainment committees for their help in making the show what it was.”

(Note: The musical saw was apparently played by Tex Hastings)